Sometimes you don’t see why something has happened until after the event and Armagh Show in 2016 was a bit like that. It was a Dublin qualifier, and I wanted to use it as a benchmark, really just to see how we compared in our re-training schedule. I got so caught up in the fact that I had been pulled in first that I forgot to tell myself that deep down I didn’t think Tag was ready for Dublin. He was still running a bit too much on his nerves and hadn’t relaxed enough to reach the level of condition I thought he could reach. His flatwork was improving but his frame was still too tight and in reality he was only pulled in because he really is very pretty. Had I gone on to win that qualifier I would have felt duty bound to go to Dublin and could potentially have set him back months with his own nervous exhaustion.

So when the word got out that there might be a racehorse class at Balmoral Show in 2017, I could barely contain my excitement. Again it would be a big ask, but logistically and financially I felt I could afford to take the risk. So with Balmoral in my sights the plan was to compete at Gransha’s Gala Weekend, the Northern Ireland Festival at Cavan and then on to Balmoral.

The first challenge in my hit list was Gransha, so borrowing a friends’ horsebox, I loaded up two ponies, one racehorse, two children, and set off for Gransha Equestrian Centre ready to do the working hunter ponies and the retraining and open racehorse classes. We set off at the usual show day ‘stupid o’clock’ and started the day off well with a clear round in the working hunter with my friend’s daughter on her pony. My son and I enjoyed helping her and as the showing classes weren’t until the afternoon we relaxed and he took advantage of the freedom that comes from being at a horse show.

As long as the kids are safe and have their wits about them I am happy that they take a bit of responsibility for themselves at shows. I have introduced this gradually, and I am lucky that my kids are sensible, but it works both ways and they know that they won’t come with me any more if they misbehave – well that’s what I tell them anyway! With the typical Northern Irish weather delivering battering rain to Gransha, the show classes were moved indoors, which I was delighted with as Tag welcomes the comfort of being inside.

We won the retraining class and were second in the open class, then unbelievably we went on to win the racehorse championship, to rapturous applause from my support team of two children. Door to door we had been out for over 13 hours that day and I don’t think I heard the children complain once.

Sometimes when we are seeing how the rest of the world live we venture into a soft play centre and the kids are usually back whinging for a drink within 15 minutes, so 13 hours was a huge success. They were both so happy for me, we laughed and joked the whole way home and my son jumped out of the cab of the horse box wearing my sash when we finally parked up. I am not a show-boater, usually I find that if I decide to show off, the next minute I trip and fall in front of everyone, but I made sure Tag got his glory that day and you couldn’t take the smile off my face. 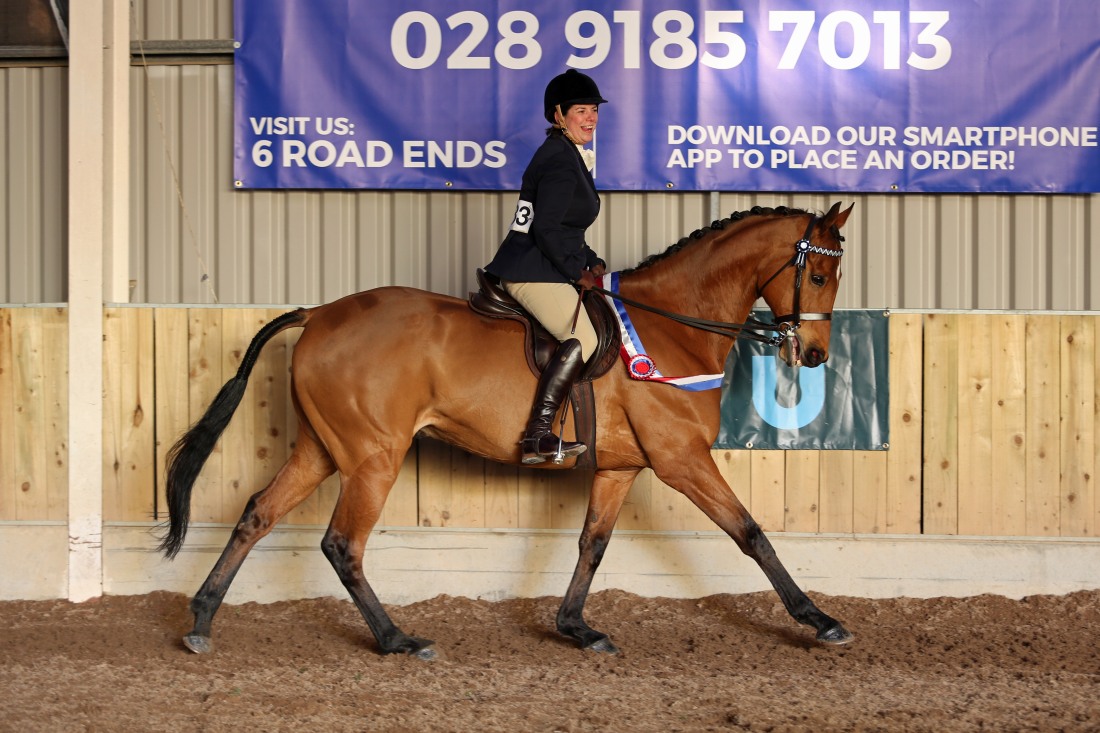 Cavan followed Gransha and we were placed third in both the retraining and open classes putting in a more assured performance than the previous year and feeling like we might be getting somewhere. Although any poor person that witnessed me trying to get Tag to walk down the concrete path to the main arena early on the Saturday morning, might think otherwise, but I can assure them that was tame compared to what he could have thrown at me.