After listening to the voicemail three times, I had established that the message was from Racehorse to Riding Horse Ireland, asking if I would like to take part in the ex-racers parade at Down Royal for their big autumn race meet. Well to say I was excited would be an understatement, to be asked was like being accepted and although I very much do my own thing with Tag, refusing to be swayed by other people’s opinions of what I ‘should’ be doing, it is always quite comforting to be asked to join in.

Going back to the racetrack was something that I would never have considered, even six months previously, but our progress was steady and I knew there was a good chance that a message like that wouldn’t be on my voicemail again. Since I had started Tag’s re-training, the closest I had gotten to his racing life, was taking him back down to the yard where he had come from and going for a spin on the gallop. The first time we did this his reaction was undeniably negative and as we left the yard and hacked up the road back home I could physically feel him breathe a sigh of relief, it was amazing how far he had come, yet his memories could transport him back to a different life in seconds.

So, going to Down Royal was a definite unknown. Of course everything goes through your head, what if he dumps me in the middle of the parade ring, what if he causes havoc galloping about the place, what if I wreck every bit of hard work I have put into making sure he didn’t think he was a racehorse anymore… 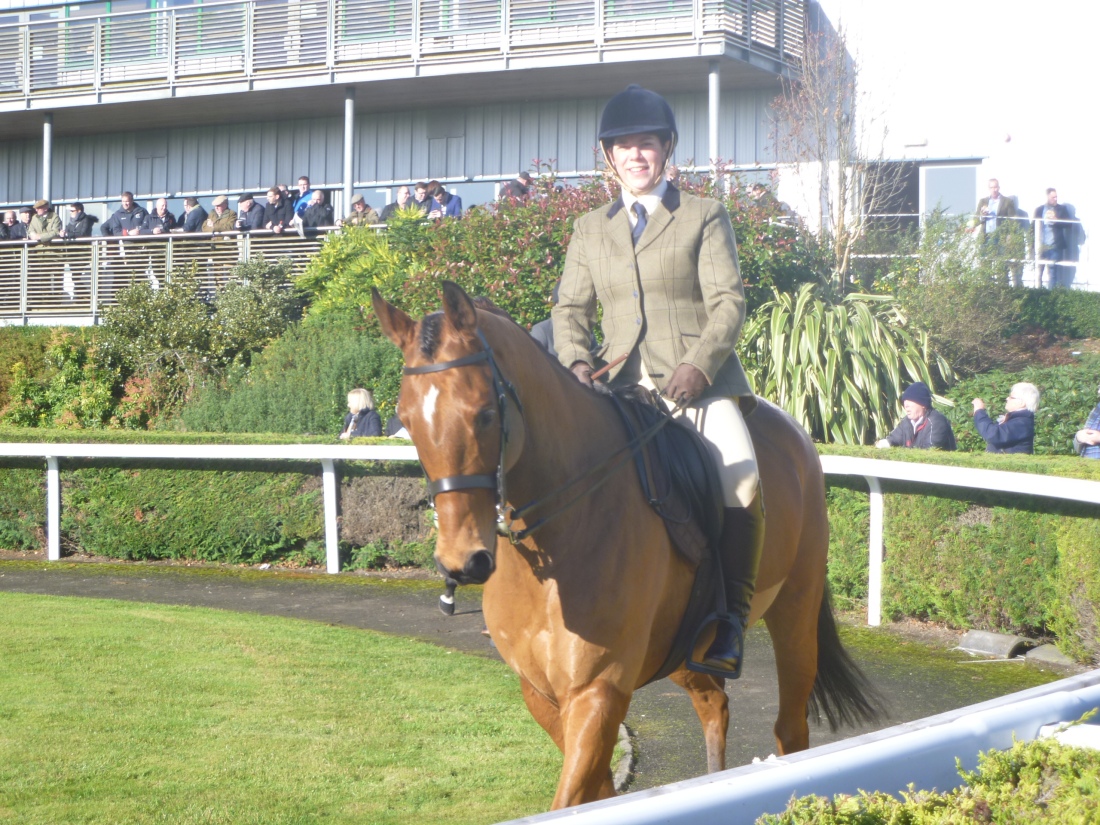 But this was too good an opportunity to miss, so I happily accepted the invitation and started to plan my day. We arrived at the racecourse in plenty of time and after several toilet trips (for me and him!) it was time to get on board and see what we were dealing with. Tag surveyed his surroundings warily and there was no doubt he knew there was something happening and as soon as I mounted I knew standing still wasn’t going to be an option. Thankfully as soon as we got into the parade ring this was fine and we could keep moving, as he bounced along on springs and I lapped it all up enjoying every minute.

We paraded for about 20 minutes, and every horse did themselves proud, showing off the true merits of a re-trained racehorse. As the parade drew to a close and the ‘real racehorses’ were due to enter the ring, our troupe started to file out, heading back to the car park and the safety of our horseboxes. This was where Tag thought the pantomime was ending, and the con that I had so successfully pulled on him was over, leaving the parade ring always means heading to the start of the race and why would this time be any different?

After some on-the-spot cantering I managed to break through the bottleneck out of the parade ring and was soon back in the car park to the immediate relief of me and Tag. It had gone well, we had stayed on board and we hadn’t made the headlines for the first female in a steeplechase at Down Royal Racecourse wearing a nice tweed jacket and finely fitted cream breeches. Result.