I recently enjoyed watching some of the highlights of the Cheltenham Festival – through my fingers of course – and I usually find myself hugging Tag a bit tighter afterwards, quite certain that I could never watch him racing. Not because I don’t love the sport, of course I do, but I have always struggled to watch a horse that I had an emotional attachment to, racing. So I get it. I get the exhilaration of Bryony Frost and her unquestionable love for Frodon. I get the speechless joy of owners, trainers, jockeys and grooms and even sitting at home, watching racing on the television, it is so easy to get caught up in the excitement of it all, as they are all feelings I can relate to.

And it does give me a boost and a desire to show off Tag and how wonderful Thoroughbreds are, especially at giving their humans the chance of a truly special relationship with a horse. But to show him off to the best of our ability, we need more lessons, which are proving very insightful and great fun for me and Tag. Every week we are pushed just a little bit more out of our comfort zone and although we can be rattled at first, it is very satisfying to get things right and feel progress happening, right at that moment. Our self-carriage is improving, he is holding himself better and I am sitting up more, he is more responsive to the upward transitions, has more lift in the downward ones and in general everything feels a lot more controlled and together.

The other week I had to ride up very close to some coloured poles on the ground and where the instructor was standing, something he found both baffling and nerve wracking. Usually – which I only realised at that moment – I let him turn early because I know he will spook at the poles, a sub-conscious move I was guilty of, allowing him to dictate where he went and when. Now, if you had said to me two years ago I would be worrying about how close he gets to a corner or a coloured pole, I probably would have laughed, as there were much bigger issues to rectify before we started picking holes like that. But now I realise that there are a breadth of smaller problems that have been holding us back from progressing.

To convince Tag to go closer to the poles and the instructor, I didn’t resort to kicking and shouting – which admittedly I might have done in the past – but gradually each time I gently encouraged him to get closer with a pat to his neck, and he did without any fuss and finished feeling very pleased with himself. Boy you can learn a lot in 45 minutes.

Someone once told me horses are one of two types, either a carrot or a stick? No I haven’t lost the plot (no, really??), but what they meant was that horses are either the kind that needs driven forward with a stick, or they respond better when they are encouraged with a carrot. Now I know this is not a black and white viewpoint, and it is most likely that a delicate balance is needed in a lot of cases, but there are definitely elements of it that are true about many horses. Tag for a while was quite frankly neither and will still opt for a non-negotiating setting, if he is really up against it. But I know that deep down he is a carrot boy and everything goes a lot more smoothly when he is gently persuaded, rather than being forced. 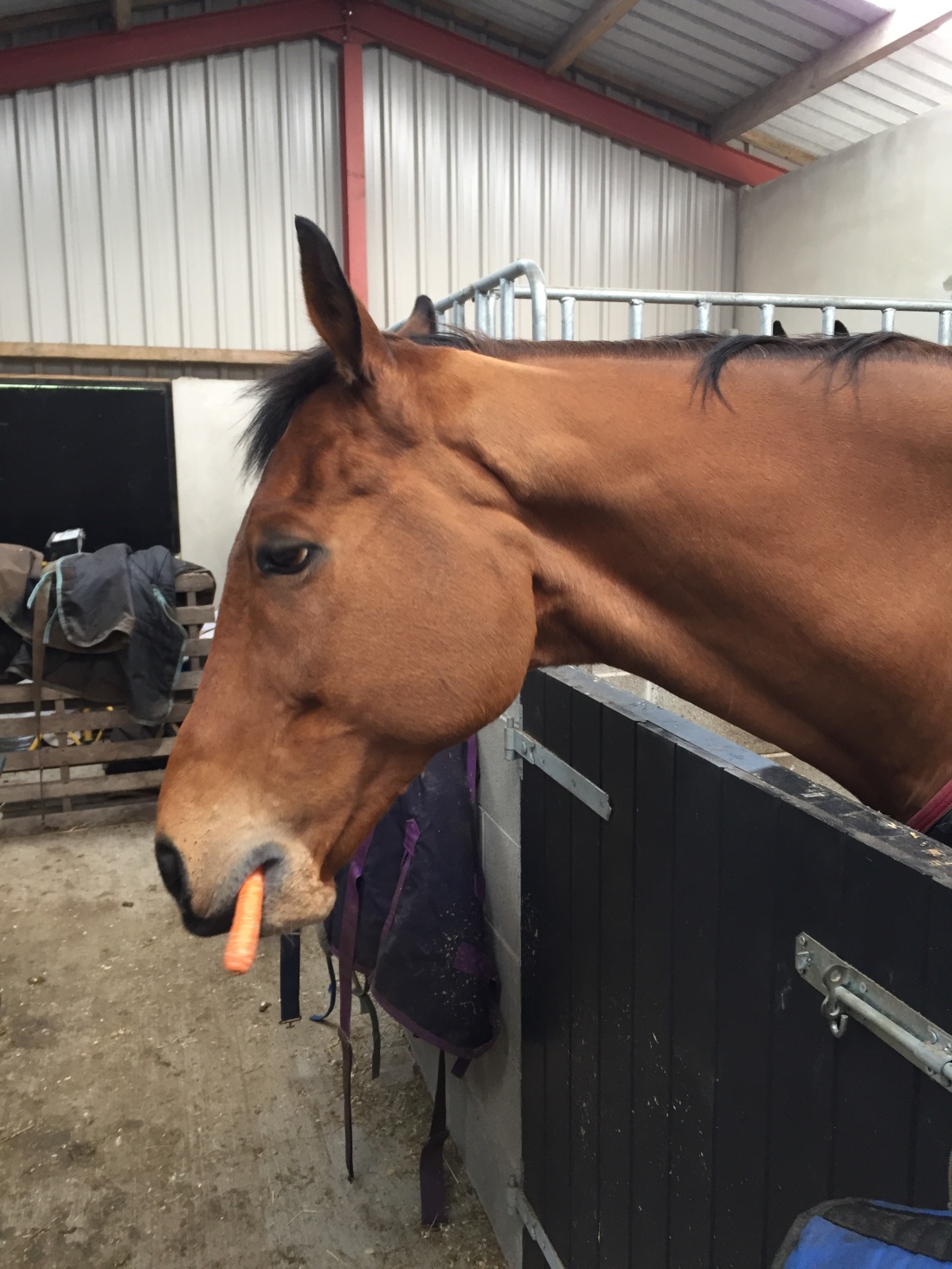 So as Tag’s confidence hangs in the balance, I know that dangling a carrot in front of him is twice as successful and much less stressful than lifting the stick. The outcome might be the same, but how everyone feels at the end of it, will not be. You would think I should know this from having two kids who are generally in the carrot contingent, with only a waving of a stick now and again! And I think most kids are designed this way, except maybe on Monday mornings….

As a student and even now, I am definitely a carrot person, and have always been very self-motivated, a quality that comes in handy when you have horses. As I worked through my equine courses at college, I loved both the academic and the practical side of things in equal measure. And when the degree work became purely library based, I usually managed to squeeze in an early morning schooling session before lectures.

I’d always hoped that someday I would find myself as an ‘adult’, able to mix books and brawn, to earn enough to pay the bills. Now, with such a ridiculously expensive hobby, paying the bills is always a struggle, but when I did finally get myself a ‘normal job’, it was probably my body, rather than my wallet, that breathed a sigh of relief.

So the horses are sorted out before and after work, ensuring that enough time is left to get the kids to school and myself to work without haylage in my hair and with matching shoes on. Admittedly it can be difficult at times to squeeze it all in, but there are worse problems to juggle and I only ever feel lucky to be doing it.

So when Monday morning comes hurtling around again, and the temptation is to lift the stick, I might just completely baffle them all with a carrot and see how that works!!  I know some people feel miserable on a Sunday night/Monday morning at having to go back to work after the weekend. But as long as I can keep the mixture of full on crazy weekends, with a well-earned seat in a warm office, joined by a nice cup of coffee and a chance to take a breath, using my brain for more than organising horsey/football outings and learning dressage tests, all will be well in my world.